As international visitors dive back into Japan after two-and-a-half years, many are eager to dive into bowls of ramen. Fortunately, there’s plenty of new noodles on the market in Tokyo. The 2022 Tokyo Michelin Guide lists 21 ramen establishments that are Michelin-starred or Bib Gourmand. Several famous stores are expanding and opening new branches, while more creative options are appearing, trying to woo diners with their innovations.

While there’s no denying that ramen still remains the post-drinking belly-filler of choice, this new breed of stores is dispelling ramen’s junk food image. Where an order might have been a simple choice between tonkotsu or shoyu, with a plate of greasy gyoza on the side, at these luxury ramen restaurants it’s carefully crafted cuisine. The focus is on quality, with many places emphasizing their use of all-natural ingredients.

From new openings and Michelin-starry heights to chefs trained in European cuisine sprinkling a myriad of influences into one bowl, we’ve highlighted a few spots for the best sophisticated slurping in Tokyo this year. Opening its doors on October 10, 2022, Koike Iekei is a brand-new venture from an acclaimed ramentrepeneur. Hiromitsu Mizuhara now boasts a mini ramen empire of five stores across Tokyo, three of which have been awarded a Bib Gourmand.

Koike Iekei, as its name suggests, focuses on iekei, literally “home-style ramen,” which originated from Yokohama and features a pork-and-soy-sauce broth. For Mizuhara, who hails from Yokohama himself, the store represents a kind of homecoming. He has crafted a blend of tonkotsu and chicken stock, creating a rich yet mellow creamy soup that perfectly coats the thick, chewy noodles.

Toppings are seductively soft char siu, spinach, green onions and crunchy seaweed. We recommend that you also add a soft-boiled soy-flavored egg. Adventurous eaters should try the side of natto-kimchi atop white rice.

The store is located in Tokyo’s Sugamo neighborhood, which coincidentally was the birthplace of the renowned ramen store Tsuta.

No list of luxury ramen could skip Tsuta. In 2015, it became the first ramen shop in the world to be awarded a Michelin star. Its founder Yuki Onishi, henceforth, became known as a master of umami. The signature dish, soy sauce ramen, features a complex broth with a blend of organic dark and light soy sauce from Hyogo Prefecture with custom-brewed soy sauce from Wakayama. It’s further enhanced with chicken, pork, clam and seafood stock, all topped with luxurious pork and truffle oil. The noodles are made from four varieties of wheat and whole grain flour freshly milled on site each day.

Other menu options include salt ramen, containing no less than four kinds of salt, one from France and three from different regions of Japan, plus tsukemen with a choice of soy sauce, salt and miso dipping broth.

In September 2022, Onishi suddenly passed away at the age of 43. The staff of Tsuta have said they will strive to continue his culinary legacy. “To those who want to pay their respects, please eat Yuki’s ramen when Tsuta reopens,” Onishi’s brother Tweeted in the wake of the sad news. 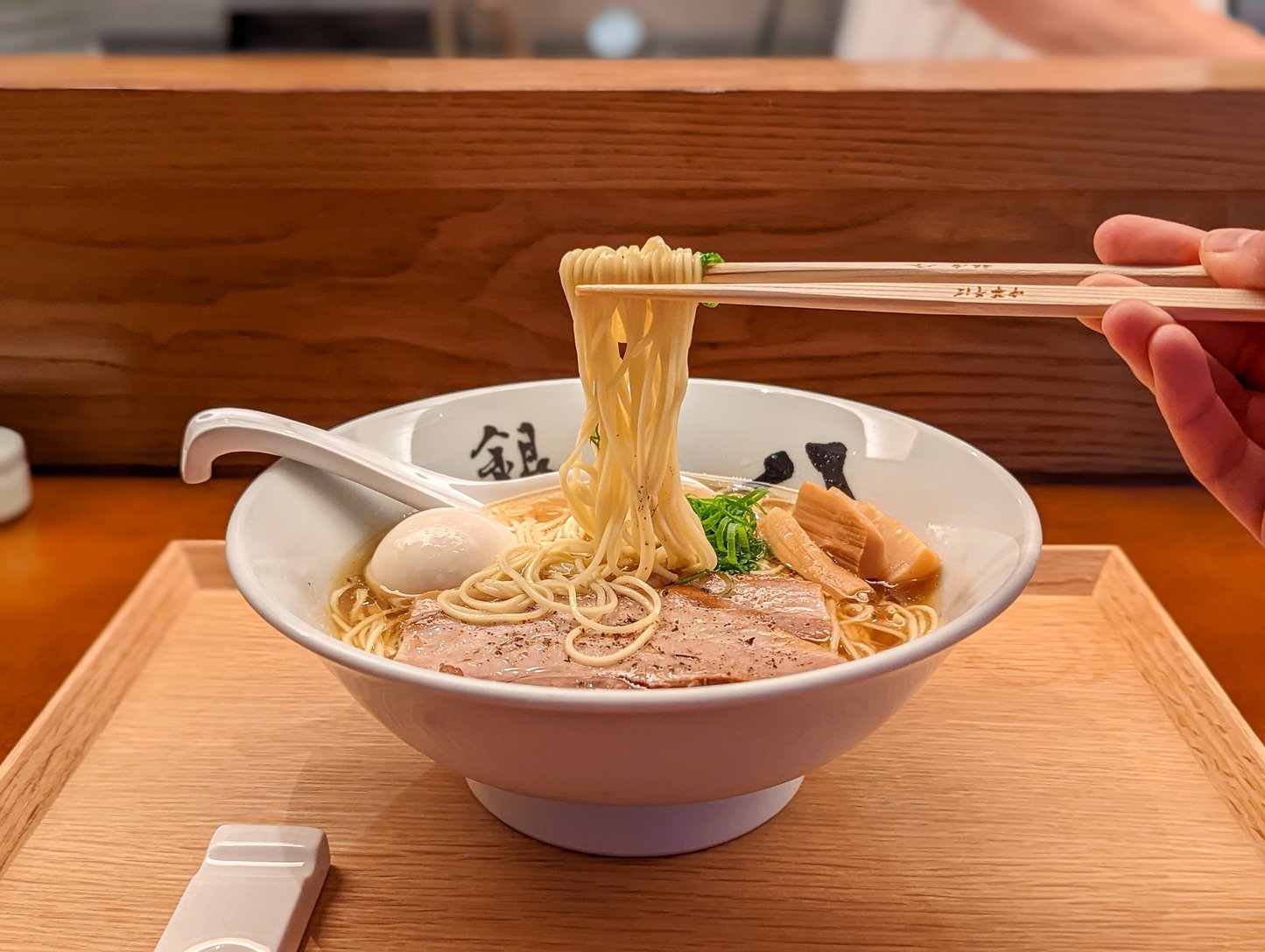 One of the latest ramen places to join the one-star Michelin ranks, this tiny store is tucked away on a street corner in Ginza and has just six counter seats.

We ventured to try this for an early lunch in pouring rain on a Friday, thinking no one would be mad enough to queue in these conditions. We were very wrong. Don’t underestimate the demand for this elegant bowl.

The store only offers variations of chuka soba — “Chinese-style noodles” — which is simply another word for ramen. But while the menu is straightforward, the recipe is not. Owner-chef Yasushi Matsumura has several decades of training in French cuisine and has crafted a clear, consommé-style broth using free-range chicken and duck, konbu seaweed, dried shiitake mushrooms and dried tomatoes. He shies away from adding any tare (sauce) however. The whole dish is finished with a thick slice of cured ham and a satisfying crack of black pepper, beautifully harmonizing Western and Japanese flavors. As the dubiously spelled name suggests, Due Italian is also pursuing a fusion approach to ramen. Its main store in Ichigaya made the Bib Gourmand list in 2015, and it has since opened several stores across Japan and even one in Taiwan.

Ginza Guchi is the latest iteration and it’s aiming to take the luxurious feel up a level with its chic interior. Like the other stores, the star dish features two slices of Parma ham decorating a golden bowl of salt-chicken broth with a decadent amount of creamy, melty cheese. Mixing it all together turns the dish into a kind of ramen carbonara that carefully stays on the lighter side.

As long-term residents of Japan will attest, cheese itself can seem like a kind of luxury just from the rarity and the cost, but Due Italian keeps prices in the range of other stores. It’s also specifically targeting female customers by offering some interesting perks, such as half-price desserts for those who order a bowl of ramen and half-price ramen on Mondays. Ladies, start your week with a bargain.