A fast-paced, crowd-pleasing style of racing that hinges on the continued loss of rear-wheel traction, drift racing has risen in popularity across the globe in recent decades, spurred on by the Japanese manga Initial D and Hollywood blockbusters such as The Fast and the Furious: Tokyo Drift.

As with most forms of motorsport, drift racing has long been a male-dominated arena, with the most notorious and successful drivers having been men for almost the entirety of drifting’s existence. But in recent years, the sport has seen an influx of female competitors who are quickly proving that they’ve got what it takes to hold their own against their male rivals — and in some cases, leave them scrambling to catch up.

One such competitor is Sayaka Shimoda, a professional driver competing in the D1 Grand Prix, Japan’s highest level of drift racing competition. Speaking with Shimoda, we gained insight into her high-speed racing life and the challenges faced as a woman in the world of motorsport. Growing up in Chiba Prefecture, Shimoda’s future behind the wheel began when she was exposed to fast cars throughout her childhood.

“From when I was born, the only car in my family was a sports car, so I grew up being driven around in it. I was not particularly interested in racing, but I did think that our car was cool and wanted to drive such a car in the future, even though I was very young,” she remembers.

Yet even while spending her younger years in the company of fast cars, Shimoda’s sights were still set on other pursuits.

“I originally wanted to be a professional volleyball player,” she says. “I chose my high school for that purpose and entered as an honors student, however, I was plagued by injuries, so I gave up on the idea of ​​becoming a professional player halfway through. I had put everything I had into it, so when that suddenly disappeared, I felt like I had lost my way for a while.”

Looking to the Future

Many of us have been there, having worked towards something we believe in, only to fall short and find ourselves asking what now?

Finding herself in such a position, Shimoda was left looking to the future, and then her past, as she reflected on her other passions in life and how she could make the most of them moving forward.

“I put all the excuses and circumstances surrounding me to rest and listened to the voice in my heart, wondering what I really wanted to do, and I realized that I wanted to be a driver, perhaps because I had always loved cars. But at the same time, I assumed that I would never be able to get into motorsport because of the huge amount of money required to start out,” she says.

Despite Shimoda’s concerns about the costs associated with entering the world of motorsport, which is notoriously expensive regardless of the discipline, the universe had other plans for the would-be racer.

“Right around that time, I saw a poster for the D1 Grand Prix in Odaiba,” she recalls. “Until then, I had only seen drifting in movies, but I thought to myself, I want to see the professional world of drifting at least once.”

The rest, as they say, is history, as Shimoda’s first encounter with the drifting world was all it took for her to know that it was exactly where she wanted to be.

“When I actually went there, I was impressed beyond words,” she says. “I thought, this is it. I made up my mind right then and there that I would definitely run here someday.” 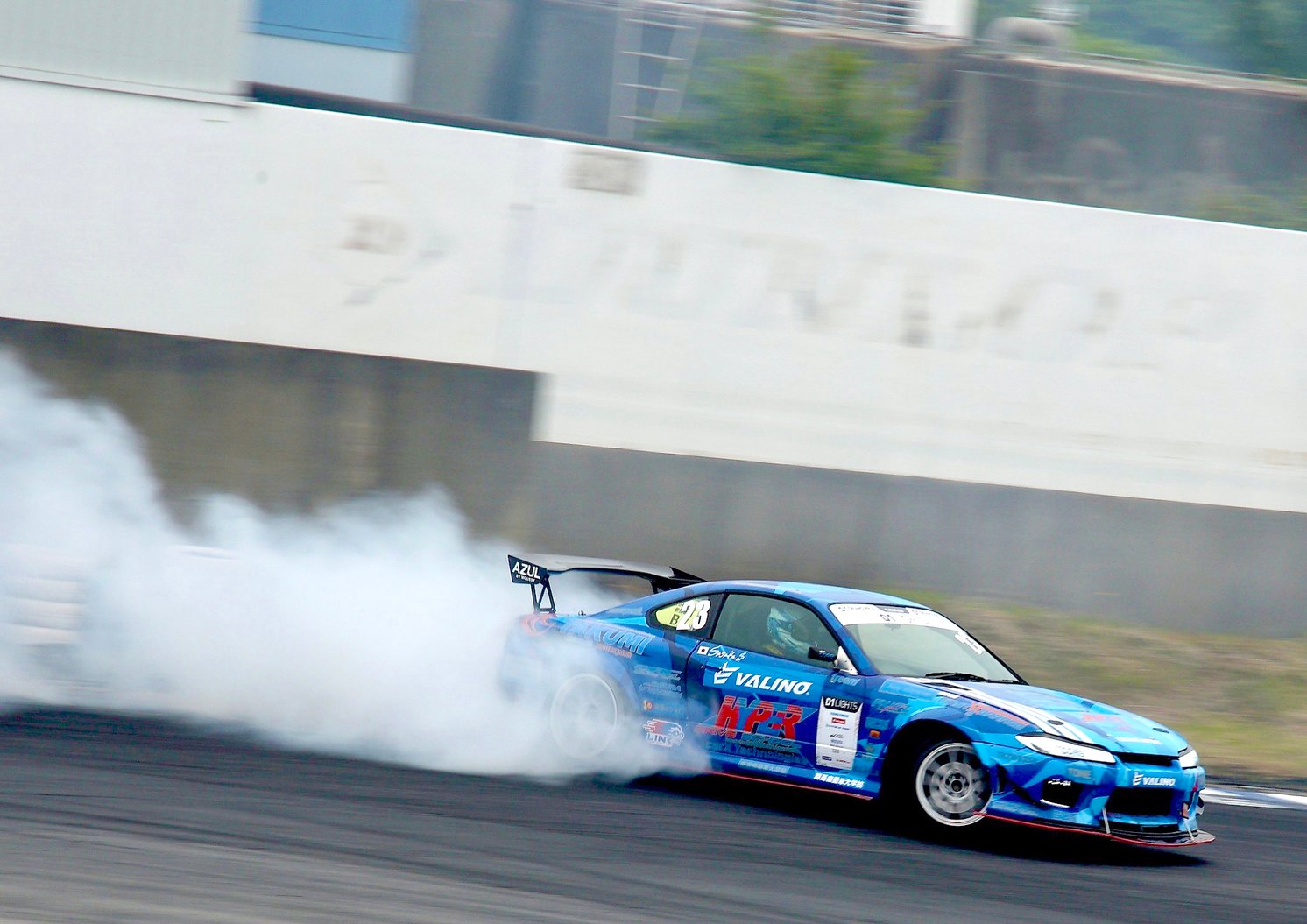 The Power of Ambition

However, even with her sights set firmly on a future behind the wheel of a drift car, Shimoda’s transition into the sport of drifting was not something that happened overnight. With steep financial hurdles to overcome before she could get started, it took years of sacrifice before she was able to even begin practicing.

“At the time, I was paying off my high school scholarship, so I had very little money left over even though I was working. My friends around me were enjoying the college life while I was working at a job I didn’t want to do, day in and day out, but strangely enough, I didn’t find it hard. Life after giving up on my volleyball dream was painful, so I guess you could say that it was easier for me to focus on working at full capacity,” Shimoda admits.

After years of overwork, which at one point, in Shimoda collapsing and being rushed to the emergency room, she was finally ready to take the leap and leave it all behind in pursuit of her professional driving career.

“After I finally saved enough money, I went to work and told them I was quitting to become a professional drift driver,” she says. “The next day, I immediately went and bought a Mazda RX-7 to practice drifting.”

Climbing to the Top

Unlike conventional racing where drivers typically work to maintain traction and go as fast as they can, drifting requires skills seldom seen in other disciplines or day-to-day driving. This means that for most drivers starting out, drifting and its techniques are entirely new concepts, although this did not deter Shimoda.

“There was a circuit within commuting distance from my house, so I started going there on my own every day. I actually spent so much time at the circuit that people would ask me if I lived there,” she recalls.

“My current mentor, Ken Sato, ran a drift school at the circuit,” she continues. “At the time, he advised me to keep practicing if I wanted to get better, so I practiced only what I was told every day for three months and gradually he came to recognize how invested I was. From then on, he began to train me seriously.”

From there, Shimoda honed her skills behind the wheel and along with school friends, created a successful amateur drift team. Success soon led to sponsorships and the ability to take her racing dream to the highest level as a professional drift driver. Paving the Way for Women

Despite where she finds herself today, Shimoda’s success did not come without difficulties, which were amplified by being a woman in an arena that for decades had been dominated by men.

“It’s a fact that the hurdle is currently higher for women. However, compared to other sports, motorsport is an area in which women can compete with men because the power of the vehicle can compensate for physical differences. There are things such as effort, car construction and teamwork that can compensate for it,” Shimoda explains.

“Although the number of female drivers has been increasing in the past few years, there are still many barriers that women face simply because they are women,” she continues. “There are many times when people basically look down on you. Until they actually see me driving on the field, they don’t recognize me. In a male-dominated society, there is a lot of pressure on women to demonstrate results in order to achieve what they want to do.”

Having survived this pressure and made it to the professional world of drift racing, Shimoda understands how daunting it can be for other women who wish to follow in her footsteps. She hopes to make the journey easier for future generations of female drivers.

“What I can do is to keep knocking down doors and opening up paths that don’t exist yet,” she says. “It takes courage and energy to be the first to do something that no one else has done, but I feel that once someone has paved the way, the difficulty will decrease considerably.”

As races conclude and championship standings are updated with the positions of individual drivers, it can be easy to forget that there is an entire team involved in making motorsport success a reality. But this is the aspect of her career that Shimoda values ​​above all else.

“I am probably most fulfilled when the team is working together toward a goal during the competitions,” she says. “The spotlight tends to be on the drivers, but there are many people behind the scenes. The people who build the car, the staff, the sponsors and the people who share the same goals and aspirations are all involved.” As with any pursuit in which a person puts themselves on the line in search of glory, though, there is more to be taken away from drift racing than plumes of tire smoke and screaming engines. It’s a world of courage and danger in which people like Shimoda shine as an example of what can be achieved with the determination to succeed.

“What gives me strength and makes me think that I can do it too is that even those who are seen as geniuses don’t keep winning,” she says. “They always experience losses and setbacks. What’s important is the ability to get up from there. By communicating our challenges through drifting, I hope that I will become a driver who can convey hope and courage to as many people as possible, both inside and outside of Japan.”

You can catch Sayaka Shimoda competing throughout the year in the D1 Grand Prix, streamed live on YouTube, or get a behind-the-scenes look on her personal YouTube channel, Drifting Sayaka.